The men and women who contributed to LGBTQ Black History

For instance, there’s Bayard Rustin. Whenever we hear about the March on Washington, the first name that comes to mind is Martin Luther King, Jr. However, it was Rustin who made the famous 1963 march possible.

Secondly there is A 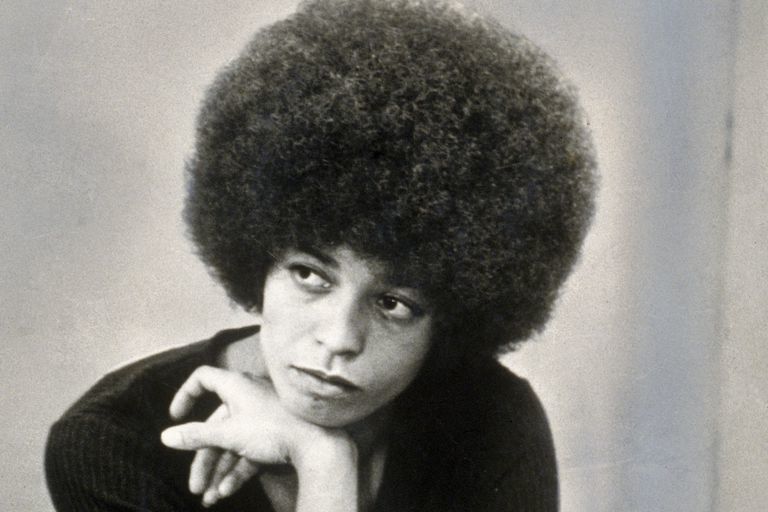 ngela Davis. She’s best known for her work as an American political activist, a scholar, and an author. She was also a leader of the American Communist party with close links to the Black Panther Party (not a member).

She focused on prison rights and founded Critical Resistance, an organization working to abolish the prison-industrial complex.

Men and women’s contributions to LGBTQ Black History Month continue with Sylvester James, Jr., who’s better known as Sylvester. He gained fame as one of the legendary Disco Queens–along with Gloria Gaynor and Donna Summer–and sang the smash hit, YOU MAKE ME FEEL (MIGHTY REAL). In addition to being a great entertainer, he was also an AIDS activist–raising awareness to how the disease was destroying the Black Community. Sadly, like many gay men in the 1980s, he succumbed to the virus. He passed away on December 16, 1988, at the age of 41.

UPDATE 03-24-2019: On March 22, 2019, Sylvester’s “You Make Me Feel (Mighty Real)” was inducted into the National Recording Registry at the Library of Congress. Each year, 25 American recordings that are at least ten years old are added to its collection. The works that are selected are those with “culturally, historically, or aesthetically” significance.

The song was added for 2019’s theme of “American changemakers.”

Today, I want to showcase dancer, singer, and actress, Freda Josephine McDonald, also known as Josephine Baker, born on June 3rd, 1906 in St Louis, Missouri. Ms Baker started her career in the United States until she moved to France. Even though she married four times to men, she also had relationships with many women.

As an actress in 1927, she became the first Black woman to star in a major motion film, THE SIREN OF THE TROPICS. When offered a chance to perform in the USA, she made it clear that she would not perform for segregated audiences.

In addition to being a talented entertainer, Ms Baker was also a member of the French Resistance, and was even offered a leadership role in the Civil Rights Movement by Coretta Scott King, following the death of her husband, Martin Luther King, Jr. However, she declined, as she was concerned for the welfare of her children.

I want to showcase a fellow author, James Baldwin. He’s best known for literary works that explored racial and social issues. Most notably, his works touched on the pressures involving being gay or bisexual. He published the novel, Giovanni’s Room, which told the story of an American living in Paris, and broke new ground for its complex depiction of homosexuality, a then-taboo subject.

Unlike many civil rights leaders, Baldwin never wanted to be a spokesperson or a leader. Instead, he saw his personal mission as bearing “witness to the truth.” He accomplished this mission through literature.

One of the most important moments in LGBTQ Black History is the Stonewall Riot which began soon after police raided the Stonewall Inn on Christopher Street in NYC on June 28, 1969. The Inn was a known refuge for the LGBTQ community.

Someone who is rarely credited for instigating the Stonewall uprising is Marsha P Johnson, a transgender woman and an outspoken LGBTQ activist. In addition to spearheading the Stonewall uprising—which later became a precursor to gay pride celebrations worldwide—she also established the Street Transvestite (now Transgender) Action Revolutionaries (STAR). The goal of this group was to help homeless transgender youth in New York City. Johnson was also very active in the Gay Liberation Front—a political action and protection group for citizens based on their sexual orientation or behavior against oppressive laws and unequal ethics.

Sadly, it is believed that she was murdered on July 6, 1992 at the age of 46. Even though her death was tragic, she still deserves to be honored during Black History Month.

Another addition to this week in the LGBTQ category of Black History Month is Audre Lorde, an American author and poet who was the daughter of Grenadian parents. She is best known for her poems that have expressed outrage at civil and social injustices she has observed. Her book, CABLES TO RAGE contained her first poetic expression of her lesbianism. She tackled other works that dealt with issues that were important to her as a woman of color, mother, and as a feminist.

Another LGBTQ personality worth mentioning for his contribution to Black History is Alvin Ailey. Not only was he a famous choreographer and dancer, he founded the Alvin Ailey Dance Theater. In addition to being credited for popularizing modern dance, he’s also revolutionized African-American participation. Even though Mr Ailey is no longer with us, his company still thrives today.

There are many qualities about Langston Hugues which define him. He’s not only another fellow author, but he’s also a poet, playwright, and social activist. It was through his writing that he stood up and defended Black gay people. Furthermore, his readings were for the everyday person, and were accessible to all. As a result, his success made him one of the first African-Americans to be able to support himself off of writing alone.

Hugues was considered to be the leading voice of the Harlem Renaissance and was one of the most visible of the younger Black poets. During his studies at Columbia University, he came up with the unique approach of combining Jazz and poems to create a new category called Jazz poetry. Many considered him to be important because he was one of the early figures who showed the dignity and beauty of Black life.

One of his biggest legacies was that he always thought of others, and used his connections to help out other authors.

Not only are there people from the LGBTQ who have contributed to Black History in the past, there’s also the present. Take for instance Keith Boykin.

According to his website, [Keith Boykin] is a CNN political commentator, New York Times best-selling author, journalist, actor and public speaker. He also teaches at the Institute for Research in African American Studies at Columbia University in New York.

Each of Keith’s four books has been nominated for a Lambda Literary Award, including his most recent book, For Colored Boys Who Have Considered Suicide When The Rainbow Is Still Not Enough, which won the American Library Association Stonewall Award for Nonfiction in 2013.

Educated at Dartmouth and Harvard, Keith attended law school with President Barack Obama and served in the White House as a special assistant to President Bill Clinton, where he was once the highest ranking openly gay person in the Clinton White House. He also helped organize and participated in the nation’s first ever meeting between a sitting president and leaders of the LGBT community.

Keith has been actively involved in progressive causes since he worked on his first congressional campaign while still a student in high school. He is a veteran of six political campaigns, including two presidential campaigns, and he was named one of the top instructors when he taught political science at American University in Washington.

He starred on the 2004 Showtime television series American Candidate, and then became a co-host of the BET J TV series My Two Cents, where he interviewed celebrities, politicians, and public figures. A former CNBC contributor, MSNBC commentator and BET columnist, Keith is also the former editor of the online news site, The Daily Voice. He has appeared on numerous national media programs, including Anderson Cooper 360, The O’Reilly Factor, The Tyra Banks Show and The Tom Joyner Morning Show.

A founder and first board president of the National Black Justice Coalition, Keith has spoken to audiences, large and small, all across the world. He delivered a landmark speech to 200,000 people at the Millennium March on Washington and he gave a stirring speech about the AIDS epidemic in front of 40,000 people in Chicago’s Soldier Field in July 2006.

Keith was an associate producer of the 2007 feature film Dirty Laundry and appeared in the 2014 BET drama series, Being Mary Jane.

His third book, Beyond the Down Low: Sex, Lies and Denial in Black America, spent four weeks on the New York Times bestseller list. Keith won the Lambda Literary Award for his second book, Respecting The Soul, and his first book, One More River to Cross, is taught in colleges and universities throughout the country.

Keith has lived in 12 cities, visited 48 of the 50 U.S. states, and traveled across four continents. In 1997 President Clinton appointed him, along with Coretta Scott King and Rev. Jesse Jackson, to the U.S. presidential trade delegation to Zimbabwe.

If one were to mention the word combinations: Slavemaster, bigotry, hypocrisy, plantation, discrimination, and NFL, for many, the name Colin

Kaepernick would come to mind. Yes, Kaepernick did expose the bigotry and hypocrisy that exists within the NFL. However, I’ll highlight him at another moment in the upcoming days.

However, in my opinion, Michael Sam was the first football athlete in modern times to expose bigotry at the highest levels of the NFL when he became the first athlete to come out as gay. This was a very courageous move on the part of Sam, as he surely knew that his actions could potentially end his career.

Sam was the SEC’s defensive player of the year—leading the league with 11.5 sacks in 2013. According to Dallas sportscaster, Dale Hansen, Sam was expected to be a third to fifth pick in the NFL draft. Despite his achievements, most teams were hesitant to sign him. He was eventually drafted in the seventh round by the St Louis Rams, but was cut from the team after the preseason. Four days later he was picked up by the Dallas Cowboys, only to be dropped seven weeks later. He was given a brief stint in the CFL on the Montreal Alouettes, but he left for personal reasons.

In a speech at the University of New Mexico on February 12, 2019, he told a packed audience that he regretted coming out as gay before the draft. In his opinion, that’s what hurt his career.

Considering that the NFL isn’t bothered by players who beat women and drag them down the stairs by their hair; who kill people while driving drunk; and who are caught in hotel rooms with illegal drugs and prostitutes, it’s asinine that they have a problem with Michael Sam just because he’s openly gay.

Sam’s courage should’ve been celebrated by all teams in the NFL—teaching young gay football players to see that their athletic skills shouldn’t be overshadowed by their sexuality. Unfortunately, due to a toxic masculine environment, many young men who have the potential to become world-class athletes will either be forced to not be themselves, or not pursue a promising athletic career due to fear of being exposed, shamed, and ultimately ruined financially and psychologically.

It’s sad that things did not turn out better for Michael Sam, however, at least in my opinion, he was a bigger man than most. For that reason, he should never be forgotten.

Russell Brooks is the author of four action suspense thrillers.